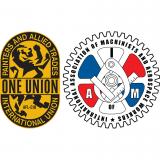 Sen. Troy Jackson was first elected to the Maine Senate in 2008, and in 2018 he was chosen to be president of the state Senate. He is a member of the Democratic National Committee and has previously served on the Inland Fisheries and Wildlife; Labor, Commerce, Research and Economic Development; State and Local Government; Agriculture, Conservation and Forestry; and Energy, Utilities and Technology committees.

Jackson is a fifth-generation logger, a member of the Painters and Allied Trades (IUPAT) and the Machinists (IAM) unions, and a passionate advocate for the rights of working people. His advocacy in the 1998 logging blockade along the Canadian border to protest unfair trade policies launched his career in politics. He sponsored legislation that recently became law, giving loggers and wood haulers the ability to stand together to demand better wages and working conditions.

A lifelong resident of the St. John River Valley, he lives in Allagash with his spouse, and they have two adult sons.

Listen to Sen. Jackson talk about the experiences that have shaped his life and career on the "State of the Unions" podcast.

An Act to Expand Application of the Maine Agricultural Marketing and Bargaining Act of 1973 to Harvester and Haulers of Forest Products (L.D. 1459)